My grasshopper is missing! Now before you think I’ve gone off the deep end, let me explain:

In late summer, we had a few grasshoppers eating my hibiscus bush. I left them alone as there were less than 10, and the hibiscus has never done well anyway. Some time in late fall, I noticed that there was still one grasshopper left on the bush and I thought nothing of it.

Some time in December, we had a freeze one night, and all the leaves on the hibiscus turned brown and shriveled. A couple of days later, I saw the grasshopper again. Looking closer, I realized that one of its back legs was missing; I thought it might be dead. But when I got too close, the grasshopper took a flying leap onto the ground, which startled me. So I left it alone.

A couple of days later, it was still there and back on the hibiscus. I didn’t know what to make of this as I know absolutely nothing about grasshoppers except that they can strip foliage off a plant in a heartbeat. I started paying attention to this little critter. Every time I thought it was dead, it moved to another part of the plant. I can’t imagine where this creature was getting food or moisture as the hibiscus leaves were definitely brown and shriveled.

Then we had rain, and wind, and three nights of lows in the teens. I was sure that would have killed off the grasshopper. Nope, still there. Every time I thought it must be dead, it was on a different part of the plant when I checked. I started checking every day to see where it was; it was always on the hibiscus bush, sometimes at the top of the stalk and sometimes lower down. Sometimes it looked like it might be dead as the bright green faded to sort of a greyish-green.

Two days ago, I couldn’t find it anywhere on the hibiscus. I eventually found the grasshopper; it had moved over to a sage bush in the next pot. The sage bush is also in bad shape from the deep freeze we had. Yesterday, the grasshopper was still there and looking a little brighter green. Today, the grasshopper is nowhere to be found. I don’t know where this little critter ended up, but it sure was persistent!

So this is one mystery I can’t solve: why did the grasshopper hang around for so long; and how did it stay alive all this time? 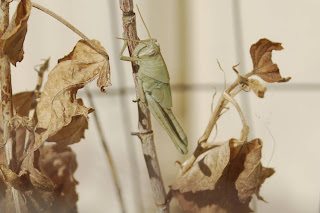 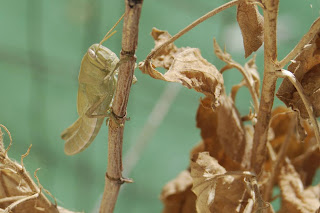 Well, now it’s back on the hibiscus! Notice the missing right back leg!!

I watched a football game yesterday. Not remarkable, really, but it started me thinking.

The game was the Minnesota Vikings and the New Orleans Saints. I have been a Saints fan almost from the beginning; the franchise started in 1967 and had their first winning season in 1987. During some of that first 20 years, Saints fans would attend games with paper bags over their heads and called the team the Aints. Yesterday, the Saints beat the Vikings and are going to the Super Bowl; for the first time; ever.

Life can be like that sometimes; we try and try and just can’t win. Then one day, we win. But it doesn’t just happen; it takes hard work, preparation, persistence, and belief that we can do it. I might have yelled at the TV a few times during a Saints game (OK, a lot of times!) but I never lost faith that some day they would make it to a Super Bowl. I just didn’t think it would take 43 years!

Isn’t that like our lives? Somehow, we pick ourselves up and keep going forward. We might get knocked down a time or two, yet we keep going. Sir Winston Churchill said it best:
“Success is the ability to go from one failure to another with no loss of enthusiasm.”

So have faith, in yourself, in your family members, in your friends, that success will come.

In my neighborhood is a tree that I pass on my daily walks. So what? I hear you saying, there are lots of trees. But this one is different; it is growing out of a tiny crack in the street right where the curb begins. Every couple of months, the road crews cut it back; every couple of months it comes back and grows a couple more feet. I live in the desert, so this tree gets hardly any rain (our average is 12″ annually; and we’ve had about 9″ or less annually for the last 10 years or more); is never fertilized; gets cut down to a nub frequently; and yet keeps trying to grow. Isn’t that so like life? We get ignored, cut off at the knees, no encouragement, yet we keep trying. Eventually, we get where we need to be. In the meantime, remember the tree and keep trying!

© A New Beginning 2006-2014. Unauthorized use and/or duplication of this material without express and written permission from this blog’s author and/or owner is strictly prohibited. Excerpts and links may be used, provided that full and clear credit is given to Ruth Rainwater and A New Beginning with appropriate and specific direction to the original content.

Come and literally join me on my literary journey!

This blog is to share my adventures in art journaling. It's a journey of discovery and you are more than welcome to join me.

Sharing our Cultures with the World

for the terminally optimistic

Fall in Love with Writing

Taste and see that writing is good!

Coaching, Support and Resources for Women with Cancer

An Ever Expanding Experience

At the corners of time and space, matter and energy

A Journey - Not A Race

Dealing with cancer in as positive a way as possible ...